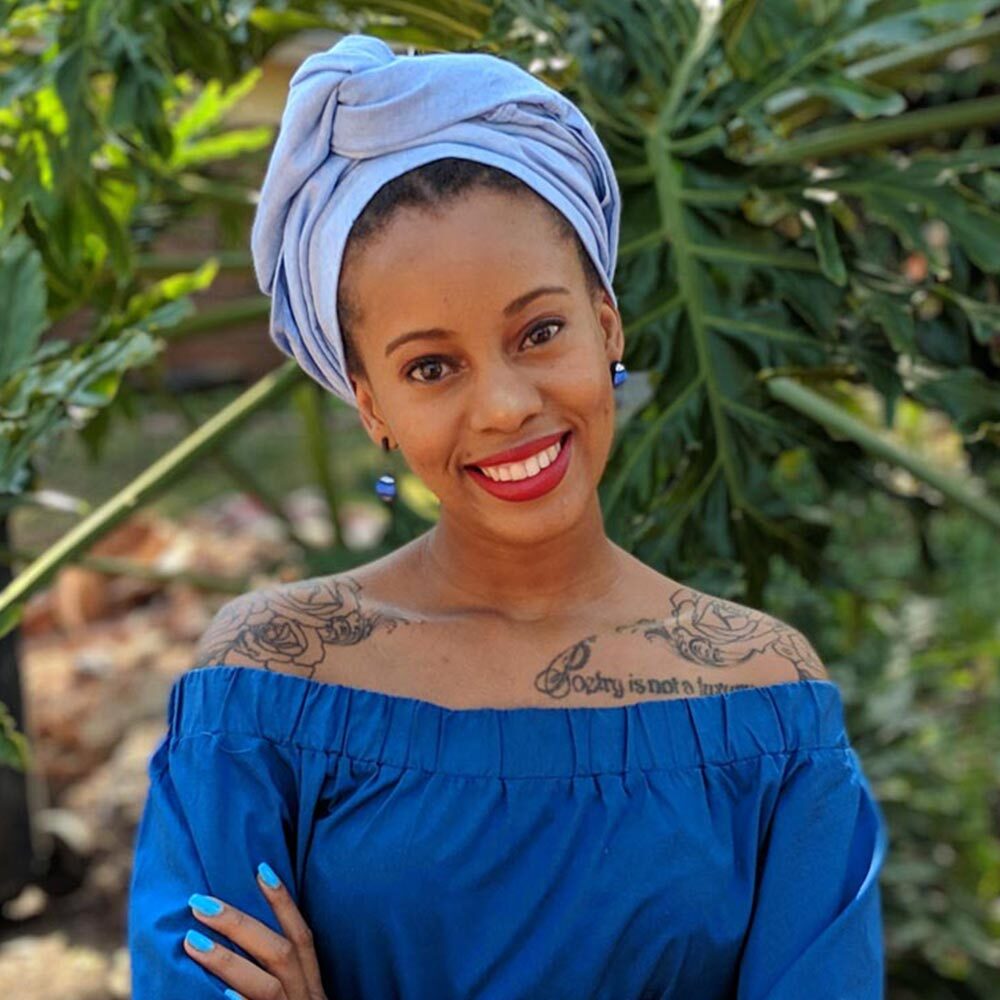 Lebohang Masango has a Master’s degree in Social Anthropology from the University of Witwatersrand, South Africa. She is the author of children’s book, Mpumi’s Magic Beads (David Philip Publishers, 2018), which is available in 9 of South Africa’s official languages, and The Great Cake Contest (Book Dash, 2018).

She is also a UNICEF South Africa advocate for volunteerism. She has also been identified by the Bill and Melinda Gates Foundation as a #Goalkeeper, one of the young people working to realise the United nation’s Sustainable Development Goals (SDGs). She is a poet and a writer working in service of her feminist politics. As an Anthropologist, she has lectured first years at North West University and she recently co-managed the Well Sexuality pilot study; a group of scholars and artists investigating notions of sexuality among the youth of Johannesburg. She regularly hosts storytelling sessions for children in schools, bookshops and community libraries. She currently hosts the Word N Sound Poetry League, a monthly open mic challenge aimed at developing young poets in Johannesburg. Lebohang has been published in Mike Alfred’s Twelve + One (Botsotso, 2014) a poetry anthology of Johannesburg poets, and To Breathe Into Another Voice (Real African Publishers, 2017), a Jazz poetry anthology edited by Myesha Jenkins. She has read her poetry in South Africa, Zimbabwe, and the UK. Lebohang used to write regularly for Rookie, the discontinued American website for teen girls, and has been commissioned by various publications to write about issues regarding literacy and feminism. A range of media platforms including news publications, magazines, television shows, and radio programmes have covered her literary and academic work.

Feminism is about love and justice. Our struggle for freedom is intricately bound up with the freedom of all the marginalised, oppressed, and even most deviant women and femmes in

We use cookies on our website to give you the most relevant experience by remembering your preferences and repeat visits. By clicking ACCEPT or continuing to browse the site you are agreeing to our use of cookies.

This website uses cookies to improve your experience while you navigate through the website. Out of these, the cookies that are categorized as necessary are stored on your browser as they are essential for the working of basic functionalities of the website. We also use third-party cookies that help us analyze and understand how you use this website. These cookies will be stored in your browser only with your consent. You also have the option to opt-out of these cookies. But opting out of some of these cookies may affect your browsing experience.
Necessary Always Enabled
Necessary cookies are absolutely essential for the website to function properly. These cookies ensure basic functionalities and security features of the website, anonymously.
Functional
Functional cookies help to perform certain functionalities like sharing the content of the website on social media platforms, collect feedbacks, and other third-party features.
Performance
Performance cookies are used to understand and analyze the key performance indexes of the website which helps in delivering a better user experience for the visitors.
Analytics
Analytical cookies are used to understand how visitors interact with the website. These cookies help provide information on metrics the number of visitors, bounce rate, traffic source, etc.
Advertisement
Advertisement cookies are used to provide visitors with relevant ads and marketing campaigns. These cookies track visitors across websites and collect information to provide customized ads.
Others
Other uncategorized cookies are those that are being analyzed and have not been classified into a category as yet.
SAVE & ACCEPT
The Zanele Mbeki Development Trust is a non-profit organisation that operates primarily on donor funds.

If you wish to donate financially or in any kind, please contact Linda Vilakazi at linda@zmdt.org.za
Make a Donation

The Zanele Mbeki Development Trust is a non-profit organisation that operates primarily on donor funds.

If you wish to donate financially or in any kind, please contact Linda Vilakazi at linda@zmdt.org.za

The Zanele Mbeki Development Trust is a non-profit organisation that operates primarily on donor funds.

If you wish to donate financially or in any kind, please contact Linda Vilakazi at linda@zmdt.org.za